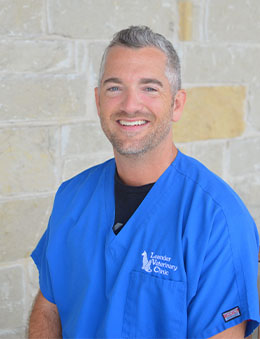 Dr. Brandon Mitchell, originally from Overton, Texas, studied for his Bachelor’s Degree in Wildlife & Fisheries Sciences at Texas A&M University while serving as a member of the Fightin’ Texas Aggie Band.

Dr. Mitchell stayed on at Texas A&M to receive a Master’s Degree in Rangeland Ecology & Management in 2005 before accepting a place to study in the United Kingdom at The University of Edinburgh, Scotland. In 2010, he was awarded his degree in veterinary medicine and surgery and was also inducted as a member of the Royal College of Veterinary Surgeons.

After graduating he spent two years working in the United Kingdom as a mixed animal practitioner before returning home to Texas. Dr. Mitchell has been practicing in the Austin area since 2013.

Dr. Mitchell has a special interest in soft tissue surgery and dentistry. He enjoys spending time with his wife and their two dogs. During time off he likes cooking, films, fishing, camping and travelling.

If your pet has an emergency after hours to please call: